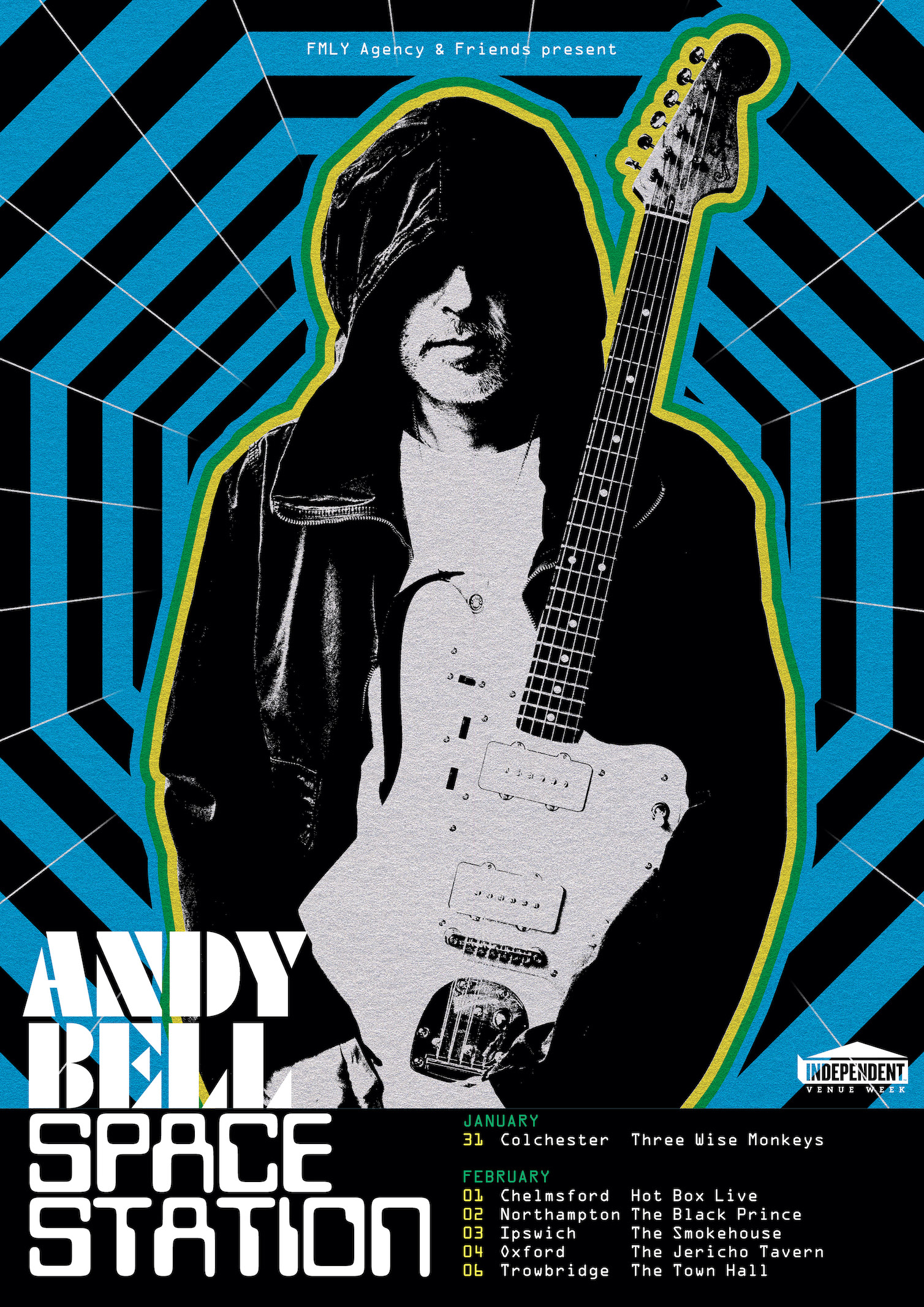 Andy Bell is a musician and DJ. He plays guitar with Ride, makes solo albums as Andy Bell, puts out electronic music and produces remixes under the name GLOK, and performs live instrumental gigs under the name ANDY BELL SPACE STATION, as well as DJ’ing.

He’s an ex member of Oasis, Beady Eye, and Hurricane #1. As guitarist or bass player, he’s also appeared live with Pink Floyd, The Creation, Talk Talk, and The Brian Jonestown Massacre, and has appeared on record as guitarist for Andrew Weatherall, and recently as bass player for Du Blonde. As GLOK he has remixed MAPS, Bon Voyage, Pye Corner Audio, Ganser, The Flamingods, Ride, Franz Kirmann, Herman Kristoffersson, Bdrmm and C.A.R. among others.

As a DJ he started off in the early 2000s, as a resident DJ and booker for “Bangers and Mash” a long running, much loved indie clubnight in Stockholm which he was involved with for a few years. Since moving to London in 2006, he has DJ’d at many places including Red Market, The Last days of Shoreditch, This Feeling, The Night Owl, The Met Bar, The Heavenly Social, and The Lock Tavern, and is a regular DJ at The Gun in Hackney. Outside of London, Andy has DJ’d at FAC 51 in Manchester and several spots in Dublin including The Sugar Club, Tengu, Button Factory, Pygmalion, and Powers Court Centre. The Irish connection is Andy’s DJ brother in law Arveene, a familiar face on the Irish scene for the last 20 years.

ANDY BELL SPACE STATION was born in 2020, during lockdown, when Andy started a residency at a coffee shop called Lo-Fi that opened up in Crouch End, North London, where he lives. As a way of reaching people with some form of live music, Andy started streaming performances from the empty coffee shop, playing electric guitar along with reworked versions of backing tracks from his various musical worlds. This is an ongoing residency, but didn’t have a name until Andy was asked by Stereolab to support them at a recent gig, which meant he had to think of a name for it. The music comes from GLOK, Andy’s solo material, and unreleased stuff too – the backing tracks are deconstructed and extended in a way that makes them easy to improvise over. The gigs are instrumental – like a DJ set with live guitar.

This gig takes place on the top floor of Three Wise Monkeys Colchester.

Access – There is no lift to access the top floor of Three Wise Monkeys. There are five flights of stairs to reach the top floor with rest opportunities between each flight.

CELEBRATING THE SPIRIT OF INDEPENDENCE & THE CULTURE OF LIVE MUSIC
Independent Venue Week is a 7-day celebration of music venues around the country and a nod to the people that own, run and work in them, week in, week out.

These venues give artists their first experience of playing live in front of an audience. They give fans somewhere to get up close to artists that one day, may well be playing stadiums and festival main stages. They also provide those wanting a career in music, off the stage, the chance to learn their craft up close in a small venue.

Independent Venue Week is unique in that it is a nationwide initiative with a completely local feel.

By championing these venues, we are able to highlight why they are so much more than just places for live music – they are cultural hubs for learning, creativity, arts and culture more widely connecting people in their local community of all ages, backgrounds, abilities, genders, skills and walks of life.

These venues, all local businesses, are the backbone of the live music scene and Independent Venue Week recognises all that they have done to create some of the most memorable nights of the past so they can continue to do the same in the future.