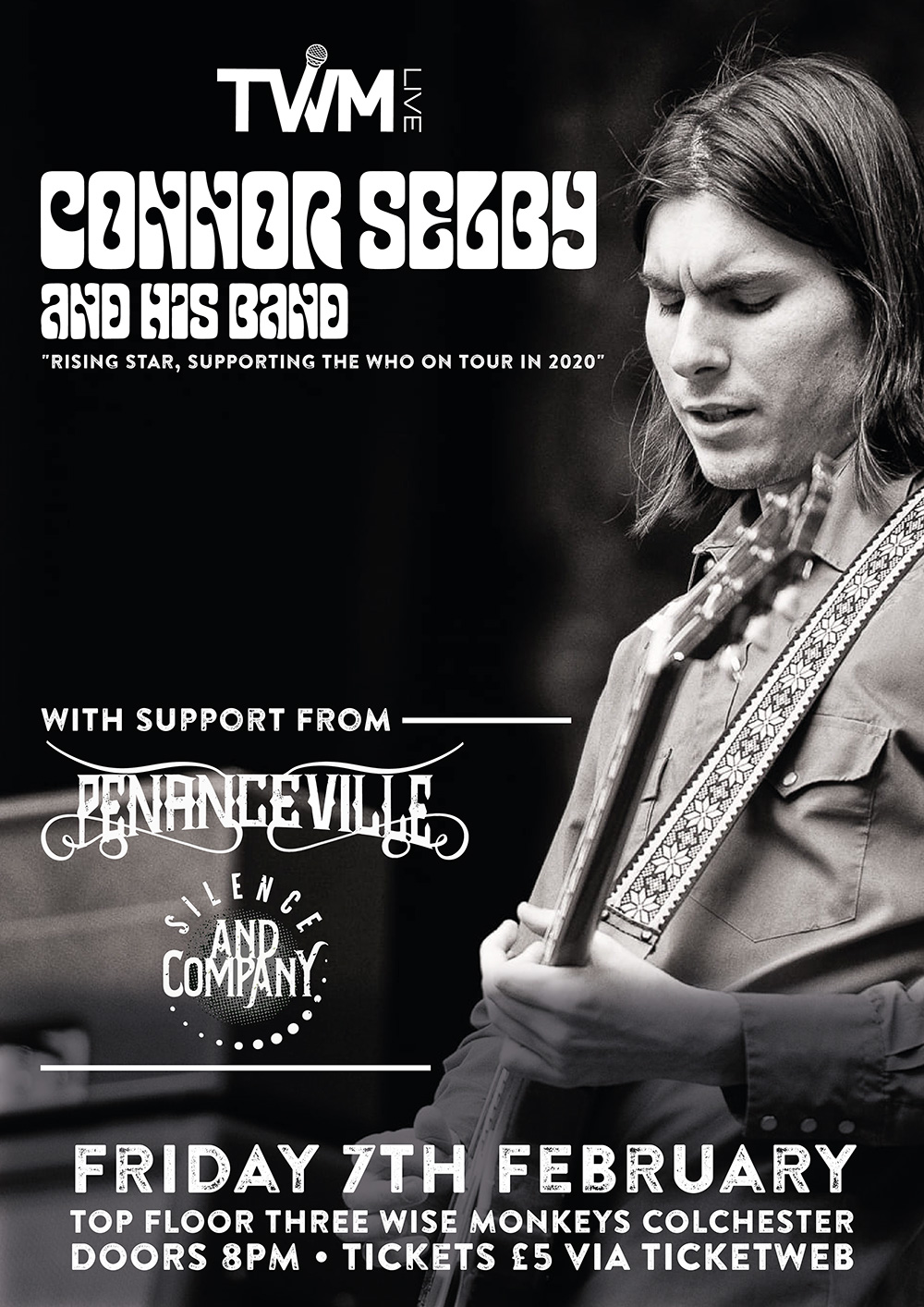 Catch The Connor Selby Band at Three Wise Monkeys before they support The Who on tour this summer.
Connor Selby is a rising star and is proving to be one of the UK’s most promising blues acts. Connor’s fluid, emotional guitar playing and soulful, authentic songwriting is attracting the attention of many Rock and Blues luminaries including The Who, who booked him to open their summer extravaganza at Wembley Stadium on the 6th July 2019, alongside acts including Imelda May, The Kaiser Chiefs and Eddie Vedder. Following that, The Who booked Connor as the main support act on their Arena Tour of the UK in 2020. British Blues Veteran John Mayall has also booked Connor to support him on his tour of the UK in November, 2019. The young British bandleader-guitarist-vocalist builds on influences as diverse as Eric Clapton, Ray Charles, and Nick Drake, creating a soulful blend of hard hitting blues and emotional, introspective songwriting. With his evocative vocal style and distinctive guitar playing that evokes the British blues boom of the 1960’s, Connor is taking the UK blues scene by storm. Connor is currently signed to 3ms Music and released his critically acclaimed debut album Made Up My Mind in September of 2018.

Penanceville
Preacher Rusty emerged from the wilderness, the scrapped pages of the book of grudges gripped in his bloody right fist. He pointed at the ground, and on that very spot Penanceville came into being.
How to make our musical style – Heavy Western: Find a big hollow Rock, and add the following… Three big handfuls of Americana, along with some bloody bones. Take a heaped bowl of Country & Western, but tip most of the Country onto the floor. Add equal parts Blues and Folk, and five tumblers of sipping liquor for good measure. Pour out onto the ground, and leave to bake in the desert sun until it’s good and nasty. Serve when cold, sprinkled with a gunpowder garnish.

Silence And Company
“Silence And Company is a Blues/Rock band based in Cambridge, UK. We have a very diverse taste in music that all comes together to make our sound. Everything from Alter Bridge to Against The Current, Motorhead to Joe Bonamassa and Foo Fighters to Guns ‘n’ Roses influenced us to create the sound you hear at our shows. We have a genuine love for making new music, playing it live and we hope to play everywhere and to everyone. We are trying to create new music with an old song but with fresh eyes and we really hope you enjoy it!”